VICKI’S TRIP TO THE CHATHAMS

I have had many opportunities through my involvement in netball, with several of my roles involving travel, for which I have been very fortunate and grateful. My most recent netball excursion away from New Zealand has to rate as one of the highlights though!

Over the middle weekend of the April school holidays I had the privilege of travelling from Nelson via Wellington to the Chatham Islands, where I had been asked to run some umpire coaching sessions. This connection was made through a family member who resides on the Island and knows of my involvement in our wonderful game.

After emailing the Chatham Island Netball President we established the format for the weekend, attempting to cater for the full range of players and officials that make up their netball community. We planned a schedule which included a rules refresher and update session, a focus on major and minor infringements, and a quick look at protocols. This was followed by some practical time umpiring friendly games to work on position, vision and timing.

Netball in the Chathams is quite strong, with four teams currently making up their competition. They play a round robin opening day, three rounds with semis and finals plus a couple of tournament days. The season is finished with the annual “Wekas” versus “Kiwis” games where “locals” take on “visitors” in kids, mens and womens games.

Competition games are played in Waitangi at the Norman Kirk Memorial Reserve, where the dedicated netball only court has recently been painted and would be the envy of many communities around New Zealand.

As is the way with many rural towns, numbers have dwindled from years past when there were up to eight teams, including one which travelled over by boat from Pitt Island each week, but the focus of bringing members of the community together regularly to share in a recreational activity is fantastic to see.

Netball is played in the three primary schools, then becomes an adult sport, as senior students mostly travel to New Zealand to attend as boarders for their secondary school education.

The netball committee is well lead by its dedicated President, who is striving to keep people involved whilst retaining some structure and not letting the rules get too relaxed. In the past composition of netball in New Zealand, this community had support from Netball New Zealand but somehow through the changes to regions and now zones these guys have been a little forgotten.

My time on the island was fantastic. It is heartening to see grass roots netball being embraced by a tight community. Huge thanks to Cheyenne and her young family for hosting me, and to Jacqui, Amber and Levi for being my tour guides and taking me around many landmarks and points of interest. Thanks also to Jen Hooper at Netball Mainland for the gifts of ACC Sportsmart ice packs and Silvermoon Tactix drink bottles, posters and stickers, plus Nelson Netball Centre for supplying rule books and whistles for sale. And massive thanks to the Chatham Island netball teams for funding my travel and being so receptive and enthusiastic to the whole session.

The Chatham Islands form an archipelago in the Pacific Ocean about 800 kilometres (500 mi) east of the South Island of New Zealand. It consists of about ten islands within a 40-kilometre (25 mi) radius, the largest of which are Chatham Island and Pitt Island. Some of these islands, once cleared for farming, are now preserved as nature reserves to conserve some of the unique flora and fauna. The resident population is 600 (as of 2013[update]). The islands' economy is largely dependent on conservation, tourism, farming and fishing. 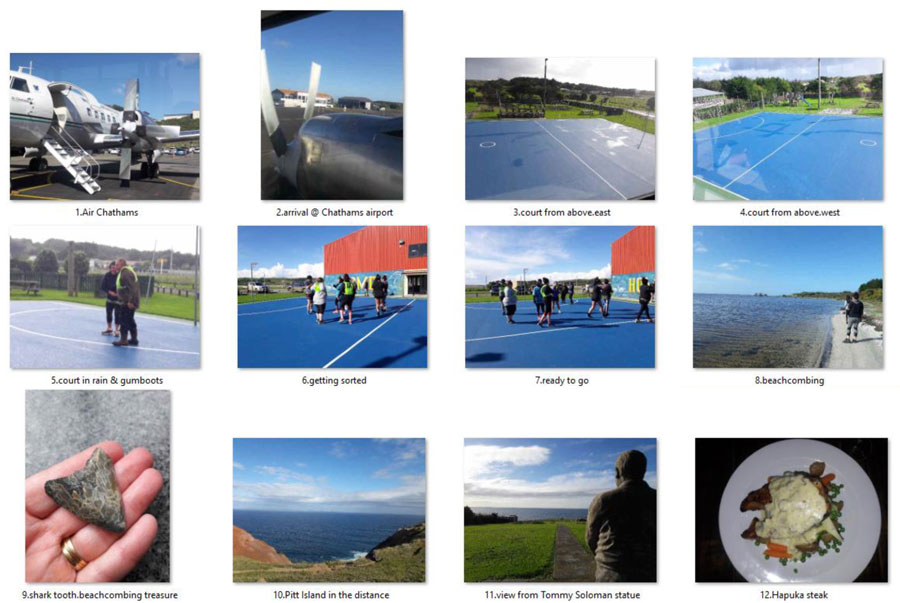